Here’s another Rock Star in the World of Calligraphy.

She just gave a five day workshop at Fort Mason in San Francisco. It was sold out. 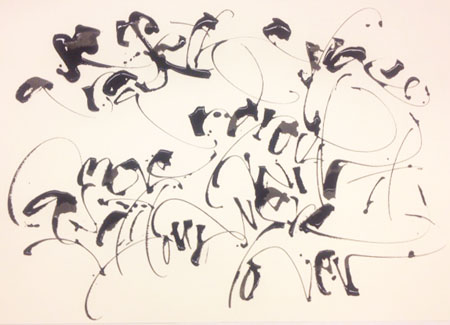 Sense the Space, by Monica Dengo

Thank you, Monica Dengo, for a great reason to travel to Italy.

Dengo lives in Arezzo, about an hour south of Florence. I met her for a nanosecond during the time she lived in San Francisco in the 1990’s.

She teaches in Italy and worldwide and her work is in public and private collections. You can find out all about her courses at her calligraphy teaching website, freehandwriting.net.

I’m especially drawn to artists like Dengo, whose work exudes a vibrant aliveness.

It’s not about a literal reproduction of what we see.

It’s more an EXPRESSION of it.

I did my own experiment and created some improvisational calligraphy. The piece below I worked a little further on with some improv digital a la Adobe Photoshop. 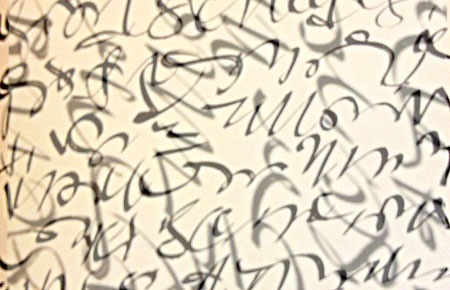 Hopefully Monica Dengo will be back next year for another demo and class. You can find one of her large scale pieces in the permanent collection of the Mountain View Public Library on the second floor.

Though Kalligraphia 13 is over, there’s a calligraphy demo by David Goggin on Friday, August 31, 6:30 to 8pm, at the Red Vic, at 1665 Haight Street, San Francisco, and he’s teaching a class there on September 1st.