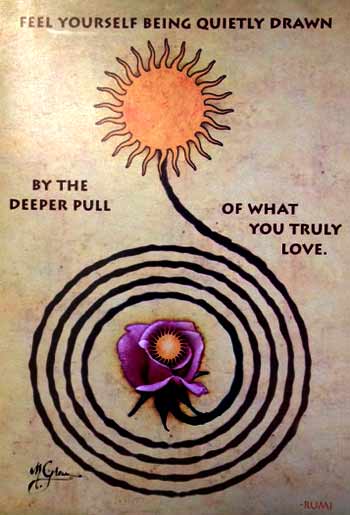 Quote from Rumi on a Brush Dance card designed by Michael Green, translation by Coleman Barks.

The “do what you love and the money will follow” phrase was popular a few decades ago. As I study entrepreneurship and how to run a successful business, that phrase often garners heavy criticism. Simply loving something, such as hot tea, doesn’t mean money will follow.

Various popular marketers I’ve been studying suggest you get a blank sheet of paper and draw two circles that overlap. Inside one circle write what you love to do. And in the other circle write what you think the world needs. The golden answers are in the section where the circles overlap.

I think there’s one other key question to ask that belongs in this method: what where you want to offer help.

Draw a third circle and write in it what you feel passion for improving in the world. Then look at where the three circles overlap.

Don’t be too quick to disregard what you love because you don’t think the world needs it.

Comments Off on Three Key Questions for Following Your Bliss 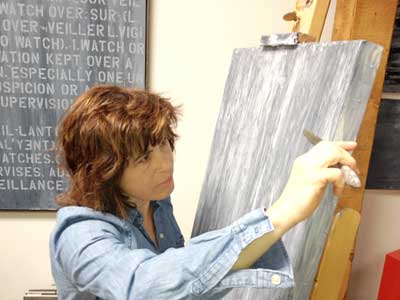 Her keen observations and agility with words were cultivated at an early age.

Sophia Green grew up in Massachusetts. Her parents had many friends who were writers, painters, and musicians. “In our household the arts were considered a legitimate career,” she said.

It was a close family friend and accomplished painter, Marilyn Powers, who gave her a formal introduction to creating Art. “One day she took me upstairs to her studio, set-up a small still life with a Mexican ceramic angel and instructed me to ‘paint what you see.’ I was nine years old. By the end of the afternoon I was hooked.”

To complete the lesson Powers handed her a book of Paul Cezanne’s paintings and said, “Study this and you will learn to see.” She still has the book.

When she was growing up, her father was an English professor at Boston University and read to her each evening before she went to bed. As soon as she learned to read she started to write.

“I wrote and illustrated an extensive series of storybooks detailing anything and everything going on around me from what I had for breakfast to the tugboats pulling ships through the harbor to my friend’s cat hunting imaginary giraffes. This love of words has never left me.” 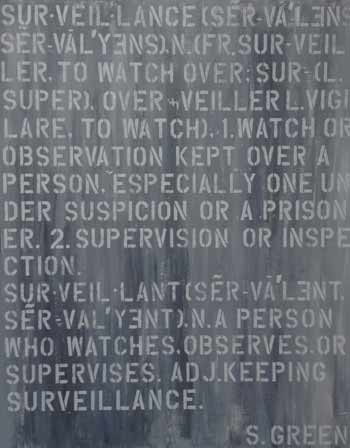 Green originally moved to San Francisco to work as a computer game artist and animator. Landing first in SOMA, she was soon forced to move and found a home in Bernal in 1996. She’s been here ever since.

After college she worked as a waitress and saved up enough tips to travel in Europe on the $1 per day plan. “While in Europe I got to see some amazing art and was especially floored by the humongous painting, The Raft of the Medusa by Eugene Delacroix.”

Though she felt awe and admiration for the European classics, “My psyche was more attuned to art movements of the 20th century, particularly Conceptualism,” said Green.

It seems a natural progression that words and their meanings have found their way into her visual work.

She’s working on “a very pragmatic approach using words (with their living, shifting, and malleable meanings), to probe and reflect upon shifting and variable social trends and concerns. It’s a continuation of a project I began last year and included a video installation and group of oil paintings titled, The Surveillance Series. The paintings draw on the current cultural environment of obsessive ‘watching’ and explore ideas of what relentless and pervasive observation means in our day to day lives,” she said.

See more of her work at sophiagreenart.com. She’s in a group show that opens April 3 at City Art Gallery, 828 Valencia St. in San Francisco.