I thought the Gerhard Richter Painting movie would only be here a week but it arrived in early May and it’s still running in San Francisco and Berkeley. In case you haven’t heard of Gerhard Richter, he’s an internationally accomplished, energetic 79 year old artist from Dresden, Germany, with an extensive body of work that covers over five decades. I didn’t discover him until a few years ago.

You may find out all you need to know about him at his website. It’s one of the most thorough artist sites I’ve seen, created and maintained by Joe Hage.

Richter currently has a studio in Cologne, Germany. A superbly detailed chronologyof his life is on his website.

It is not a reflection on the movie but I was true to a habit of mine and fell asleep briefly during the film. I am not sure what I missed, but I enjoyed the gentle pace and the peek inside Richter’s life.

Implanted somewhere past the beginning, there’s a montage of photographs from his childhood, and how his family had to move to Poland. He talks briefly about how his parents wanted him to be a doctor, then he tried becoming a dental assistant and failed at that.

You get to see how much his studio assistants help with mixing paints and photographing his art, and an array of other tasks. His wife, his manager, and various museum and gallery personnel make an appearance as well. Once in a while you hear the filmmaker, Connie Belz, asking him questions while she’s behind the camera.

The movie documents Richter between April and September of 2009, at work in his studio in preparation for a show at the Marian Goodman Gallery in New York. But that’s not all you see about how he prepares.

One of my favorite things was seeing the meticulous preparation made for exhibitions. There’s careful study of the space using to-scale architectural models dissecting every wall, hallway, and sometimes the lighting system. Then shrunk to-scale Richter paintings are placed on the model’s walls to see how it will look.

Later in the movie there’s what I think is a big reveal — the work hasn’t always been created yet even though the show is already booked! 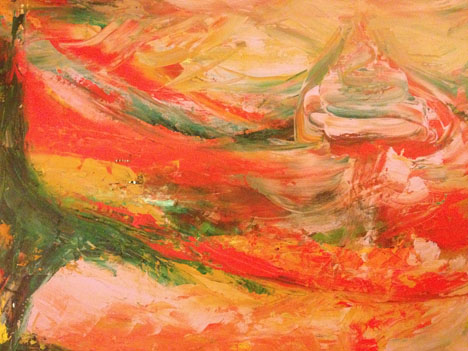 The second favorite thing I liked was seeing this world famous artist like his work and two hours later hate it, and two days later like it again. Richter admits sometimes he doesn’t know where the painting is going, or it doesn’t go where he thought it would as the painting has a life of its own that he honors.

One other thing I really liked was getting to see the use of Richter’s custom-built giant squeegee. He paints an undercoat of colors which in themselves look like a finished abstract painting. In the example towards the end of the film he says he uses red in the undercoat because he’s going to squeegee green. Then he applies one big glob of paint on the canvas and moves it either across or down with his arms wide (maybe 5 feet) squeegee. This looks like palette knife painting taken to a scientific level! How gestural can you get with a palette knife that size?

I don’t want to ruin the surprise at the end. There you’ll hear the three words that say what making art is all about to Richter.

You might also enjoy:
–5 Reasons to Get Thee to the Getty
–10 Memorable Quotes from the Founder of Zero Point Painting
–5 Resources for Selling Your Art Online

A True Art Spirit in a New Documentary

When I found Gerhard Richter‘s work I felt validated. Here’s a successful artist who works in photography and painting has elements of reality and non-reality. He isn’t working in one narrow genre. I like that.

Richter’s “Forty Years of Painting” show appeared in 2002 at the San Francisco Museum of Modern Art. I didn’t know about him till someone who loved his work pointed it out to me a few years ago and I saw Richter’s work in SFMOMA’s 2010 Fisher Collection.

If you can catch the documentary about him, don’t miss it!

You might also enjoy:
–Messages from a Spirit Photographer
–Speaking for Millions of Petals in the Dust
–2 Artists Successfully Selling Art Online