3 Examples of Fingerpainting without Paint 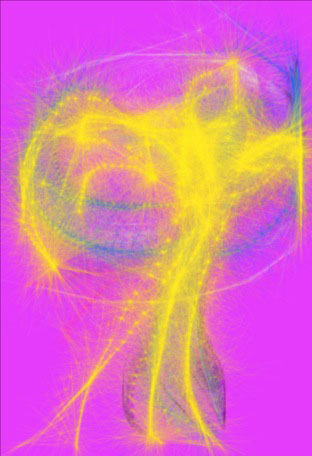 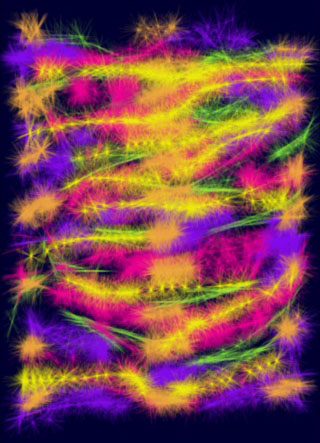 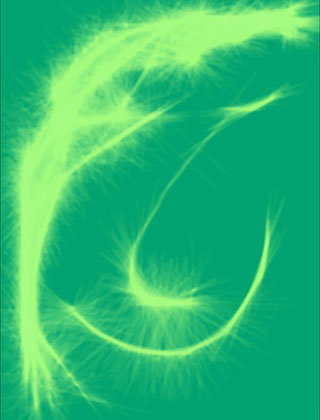 You can make art wherever you are with a drawing application called Harmonious, created by the Angry Robot Zombie Factory.

Even if you are on a desktop, you can create drawings on your computer by going to the

Here’s a few drawings I created. For more examples check out the Harmonious gallery of creations.

Enjoy the 11 different line types and unlimited color choices. I like the undo that goes back at least 7 steps.

I hope you’ll give Harmonious a try if you haven’t already found it.

Do you have a favorite drawing app you’d like to tell us about?

Before continuing on with the 14 tips I gathered from Wayne Freedman’s presentation on storytelling, I thought you might enjoy this video of him produced by Warren Mayer. In under 60 seconds hear what Freedman’s advice is to journalism students.

Below is the continuation of the previous post sharing tips I garnered from Freedman’s keynote at the day-long workshop, the “National Academy of Television and Academy Sciences (“NATAS”) Storytelling Workshop.” It was put together by video journalist and photographer Jeremy Carroll and held at the American Broadcasting Company-owned station, KGO-TV, in San Francisco.

5) Let the interviewee find his comfort zone in the interview. This could be by finding a comfortable place to sit. Move the subject around the room, like by the wall, by a window, etc.

6) Find a reason to make people want to talk.

7) Use keywords. When Freedman’s on-camera he said he doesn’t have his script written out, he uses keywords.

9) The news story should be able to stand on its own – have a beginning, middle and end. Introduce people by their name (since interest in a person brings interest in the story). Set the scene … “It was the best of times, it was the worst of times.” Add a surprise reveal.

10) Use a Thesaurus! If you get writer’s block use a thesaurus to help you. A thesaurus can also help you identify themes and ways to open or close your story.

11) Bring your own wisdom to your work. Listen to things you say to yourself and put those observations into your story! Come up with simple truths. That add universal appeal to your story. “One small step for man, one giant leap for Mankind,” is an example.

12) Situate yourself for success. “Luck is only good when you’re ready for it and prepared to take care of it when it happens,” said Freedman. He tells the story of when he covered baseball player Cal Ripken, Jr. He didn’t get an interview in advance with Ripken but found a spot next to stand next to Rifken’s wife. When he came to be with his wife, Freedman was able to ask him a few questions. He got the story.

13) People usually have the ability to remember three facts. Three. There’s more to a story than the 5 W’s (where, what, when, why, who).

14) The final tip is a flip from what we’re used to hearing. “You’re only as good as your worst story,” said Freedman. “It’s about time, distance, and people management.”

You can find Freedman’s book at Amazon.

More helpful storytelling tips from other video journalists continued after lunch. Stay tuned and I’ll share those notes in the future.

You might also enjoy:
–5 Tips for Producing Digital Multimedia
–3 Memorable Quotes from Steve Jobs
–3 Reasons to Write Your Own Obituary

14 Tips from Wayne Freedman on Storytelling

The keynote speaker has won 51 Emmy Awards from the Northern California Chapter of the National Academy of Television Arts and Sciences. That was plenty of endorsement for me to see Wayne Freedman as he led the first half of a workshop I attended where six San Francisco television journalists shared their tips on telling news stories.

The official event title of the day-long was the “National Academy of Television and Academy Sciences (“NATAS”) Storytelling Workshop.” It was put together by video journalist and photographer Jeremy Carroll and held at the American Broadcasting Company-owned station, KGO-TV, in San Francisco.

Freedman’s book, It Takes More Than Good Looks To Succeed at Television News Reporting, is now in it’s second edition (2011), and required in many college journalism programs in the U.S., Canada and Europe. He shared some information on storytelling that’s worthy of sharing:

1) Feature writing techniques may work better for many television news stories than the traditional news story structure. Instead of putting the most important relevant facts first and the details later, tell the story with a beginning, middle, and end. And add an element of surprise or a big reveal.

Freedman gave several examples of how storytelling is strengthened by not going in chronological order of the actual event and moving elements around. For example, a story he did about a woman’s freeze-dried dog. The order of reveal is not chronological.

2) Storytelling is about structure and timelines. There’s not one timeline, there’s three:

a) the order of events;
b) the order which you shot those events; and
c) the order you put the timelines in the story.

Move the timelines around to add more interest, which changes the structure.

3) Set the Scene. This might be done with one line or ten lines. Don’t give away the story with the first line or begin with the punch line.

4) The viewer needs to have an emotional investment in the subject. Television is a visceral medium. “The road to the head goes through the gut,” said Freedman. Tell stories through people. Compelling stories are visceral stories. “Visceral” means appealing to our instincts more than our intellect.

If the viewer cares about the person they’ll care about the story. Find a person to tell a story. “Sometimes you can tell two or three stories through one person.”

Read more about this Wayne Freedman’s tips in my next post.

You might also like:
–7 Elements to Include in Digital Storytelling
–4 Simple Tools for Effective Storytelling
–Where Do Opals Come From?

Coming out of the garage heading to San Francisco City Hall I couldn’t miss this beautiful lively inflated red lotus flower sculpture. The leaves are motorized though the wind helped them move even more. “Breathing Flower” was created by internationally renowned Korean artist, Choi Jeong Hwa. The flower opens and closes as though it’s alive!

This piece was installed on May 16, 2012 at a spot formally known as Civic Center Plaza, across the street from the Asian Art Museum and the San Francisco Public Library (which currently has some intriguing huge photographs pasted on the front and side of the building, reminding me of JR, the 2011 Prize Winner of the TED Award).

The large photos range from five to fifteen feet tall and are the first artworks ever to appear on the exterior walls of the San Francisco Public Library. The “Making Mothers Visible” show is part of a global photography exhibition sponsored by the International Museum of Women.

Getting back to the video above. There was someone handing out flyers and music was coming from their boombox. It magically matched the poetry of the moving flower.

Thank you Choi Jeong Hwa for your creative inspiration!