What Can Playing a New Sport Teach You?

Alan Francis has won the Horseshoe Championship 15 times. He is the best horseshoe pitcher ever!

I tossed horseshoes for the first time not long ago and found out about Francis when I was looking for more info about horseshoe pitching.

“Beginners only hit ringers only one to three percent of the time,” said Francis in a television news story in the YouTube video above.

This made my first ringer on my first day of horseshoe pitching all the more special! Though, as you can see from the photo, I wasn’t tossing in an “official” pit. It was a casual set-up in the park.

Have you tried a new sport and felt intimidated? A new set of rules, new equipment. Like a new canvas and fresh brushes for the non-artist.

What’s involved in hitting the stake to achieve that metal to metal “clang!”? The National Horseshoe Pitchers Association spells out how it is done.

From that fun day pitching horseshoes for the first time, I reflected on the sweet underlying message. Enjoy the flow. The new. Watch someone who knows how to do it right (aka a role model). Focus. Visualize success and expect it! 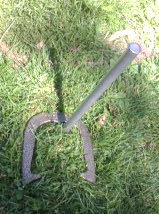 “First Ringer,” from Day One of Horseshoe Throwing

The World Champion in Horseshoe Pitching in 2010 won $4,000. Another lesson! Something you love that you’ve been doing since the age of 7 and you are the best in the world at may not pay the bills. But don’t let prize money stop you from trying a new sport. You just might pitch a ringer!

You might also like:
–7 Ways to Make Your Presentations Sparkle
–3 Memorable Quotes from Steve Jobs
–3 Discoveries About Intuitive Painting