Is This the Year You “Do the Work”? 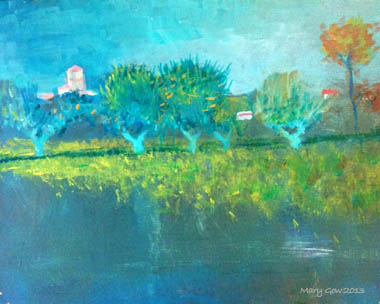 Channeling Van Gogh, a work in progress by Mary Gow

I wish you an exceptionally creative, productive and expressive year!

If you’re looking for a quick read that will give you some umption, I suggest Steven Pressfield’s latest book, Do the Work.

The book gives a closer look at what Pressfield calls “The Resistance.” I find this is similar to what Julia Cameron in The Artist’s Way calls “Creative U-Turns.” It’s when you might want to give up when you’re a few steps from success and you’ve talked yourself out of completion.

Like Stephen Covey’s 7 Habits of Highly Effective People, Pressfield recommends you begin with the end in mind. Where is it you really want to go? The end comes first, then the beginning and middle. While at the same time, he suggests beginning without overthinking where it will end and get started before your critical mind stops you:

Similar to what Dr. Wayne Dyer said about having a space to create where no one can disturb you, Pressfield stresses the importance of blocking out a time and space when you don’t let ANYBODY or ANYTHING distract you and you focus strictly on your work.

Every so often, for instance twice a week, while you’re working on a project, he suggests you ask “What’s this about?” and “What’s the theme?” and keep doing this as you create.

In the latter part of the book the seven principles of resistance are discussed:

Number One: Accept that there is a force that is working against us.
Number Two: This force against us is unrelenting.
Number Three: This enemy is within and not outside of each of us.
Number Four: Though the enemy is inside of you it is not YOU.
Number Five: You have to See yourself as the knight and the Resistance is the dragon.
Number Six: Resistance shows up after the idea, so hold onto the idea and don’t be scared by the frightened ego’s voice.
Number Seven: There are unseen forces guiding you and will help you see that assistance is available to move through Resistance.

When Resistance comes up it’s an opportunity to test 2 things:

1) How badly do you want what you’re pursuing?
You can figure out where your level of desire is with a brilliant continuum (from p. 77 of the book):

2) What’s your WHY for wanting it?

If it feels more like IT has chosen you or it’s because you’re having fun that’s key.

It could be you’re within striking distance of success. This is usually the case when Resistance or the U-Turn shows up.

Slay the dragon. Keep going, you can make your way through the problem and keep going forward.

Pressfield shares how it took him seventeen years to get his first professional writing job. And it flopped, which meant he was a success because he had a real failure.

That meant he was “turning pro” as he calls it in The War of Art and in his book, Turning Pro.

Silence the naysayers in your mind and in your social circles, take action, write and rewrite. Make 2013 the year of doing the work!

The Yes Tree, watercolor and pencil on paper, by Mary Gow

As promised from an earlier post, I’m revisiting Steven Pressfield’s The War of Art and what distinguishes a “Professional” from an “Amateur.”

According to Pressfield a professional:

1. Is Patient.
2. Seeks Order.
3. Demystifies.
4. Acts in the Face of Fear.
5. Accepts No Excuses.
6. Plays It as It Lays.
7. Is Prepared.
8. Does Not Show Off.
9. Dedicates Herself to Mastering Technique.
10. Does Not Hesitate to Ask for Help.
11. Distances Herself from Her Instrument.
12. Does Not Take Failure (or Success) Personally.
13. Endures Adversity.
14. Self-Validates.
15. Recognizes Her Limitations.
16. Reinvents Herself.
17. Is Recognized by Other Professionals.

Watch a video here and see Marie Forleo’s most recent interview with Pressfield about his latest book, Turning Pro.

My painting today is titled “The Yes Tree.” It’s about following the ‘yes’ that feels right in your gut.