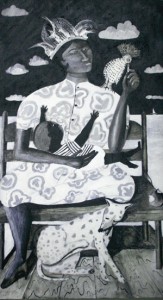 Lunch at the Lake, by Nancy Adair

I met Nancy Adair on a kayaking trip. At the the retreat center I spotted her expressive painting, Lunch at the Lake. The painting is about 36″ x 60″.

You can name an intersection in San Francisco and she’ll know exactly where it is because 25 years ago she drove cabs there. For the past two decades she’s been a painter, seeker and sometimes yoga/meditation teacher in Mendocino County.

She didn’t listen to a diagnosis that would require taking prescribed medicine, which she felt was “like wearing a glove on my psyche…not something I could handle as an artist.” Instead, Adair finds Vipassana the best medication.

She is also a filmmaker and one of the directors of the film Word is Out: Stories of Some of Our Lives. The film is a documentary about Gays and Lesbians and was considered groundbreaking at the time of its release in 1977. Her now deceased brother, Peter, was the producer. You’ll find Adair’s film streaming on Netflix.

Looks like I’ve found an artist with some audacity.