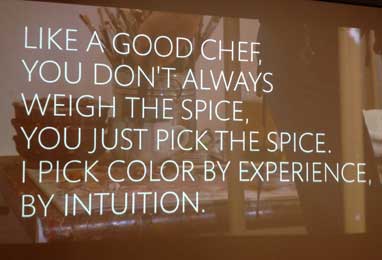 She arrived in the United States with three suitcases, $20, and a whole airplane load of ghosts.

“You live to tell, tell to live,” said Hung Liu.

It was Earth Day, April 20th, as I dashed from taking photos of trashion (short name for trash fashion) at the Berkeley Vegan Festival to the Oakland Museum of Art. I didn’t want to miss a chance to see and meet one of my heroes.

More people showed up than there were seats available inside the auditorium. Maybe it was fate, I got in just before the cutoff.

Liu was dressed in a black tunic with pants and her long hair was pulled back. She spoke for 45 minutes about her life and journey as an artist and was then interviewed by senior museum curator, Rene de Guzman.

“Summoning Ghosts: The Art of Hung Liu” is on display until June 30, 2013 at the Oakland Museum of Art.