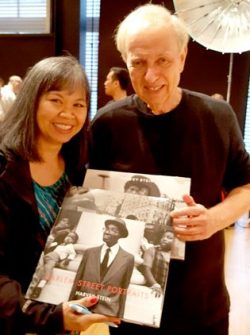 Mary Gow with Harvey Stein, holding 3 of his books. 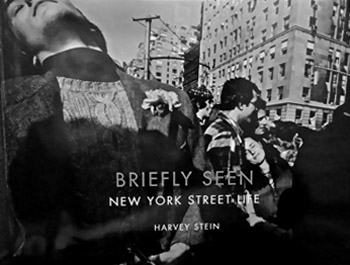 The World is Harvey Stein’s studio. He concentrates on the World-at-Large. Outside of the studio IS his studio. And books, he declared at the book signing, are his perfect form of sharing his observations.

Stein’s called New York City home for over 40 years. He’s a professional photographer, teacher, lecturer, curator and author. He’s received numerous awards and his photos are in more than 55 permanent collections including the George Eastman House, the Bibliotheque Nationale, the Art Institute of Chicago, the Museum of Fine Arts, Houston, the Boorklyn Musuem of Art, the New Orleans Museum of Art, the Carnegie Museum of Art and the Denver Museum of Art.

He teaches at the International Center of Photography (ICP) and has been on the faculty of the New School University, Drew University, Rochester Institute of Technology, School of Visual Arts and the University of Bridgeport. 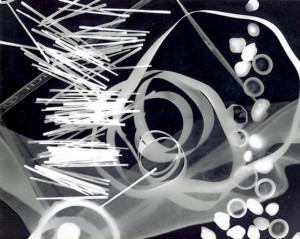 I took my first photography course at ICP with Harvey Stein as my instructor. It was a ten-week course and we did a lot of street photography. I was enthralled with seeing the chemistry process – especially when the image begins appearing on the photo sensitive paper. I loved darkroom work (though it’s becoming a lost art now). 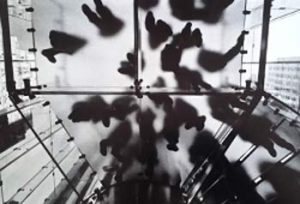 One of my favorite photos by Harvey Stein 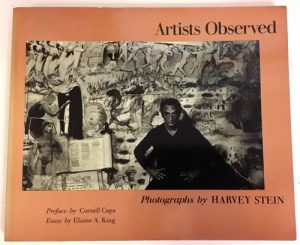 One of the first things we learned in Stein’s class was how the enlarger works. At its most basic level, an enlarger casts light onto photo sensitive paper. It was then I made my first photograms by placing objects on top of this paper. The x-ray look of them got my attention. And it touched on my obsession with line, shape and form which could be highlighted through layers.

It was in Stein’s class I found an artform that really worked for me.

I went on to make more photograms, some won awards. I felt especially honored by recognition in a show juried by California photographer and photogram-maker, Robert Buelteman. I also went on to work as a freelance photographer and my work’s appeared in newspapers, magazines, online and in books.

It was a delight to see Stein again after many years. He visited the Leica Store in San Francisco in June of 2016 to introduce three of his books: Coney Island 40 Years, Briefly Seen and Harlem Street Portraits, plus offer a three day workshop on street photography.

Thank you Harvey Stein for your inspiration!

Visit his website to see his work and world at harveysteinphoto.com